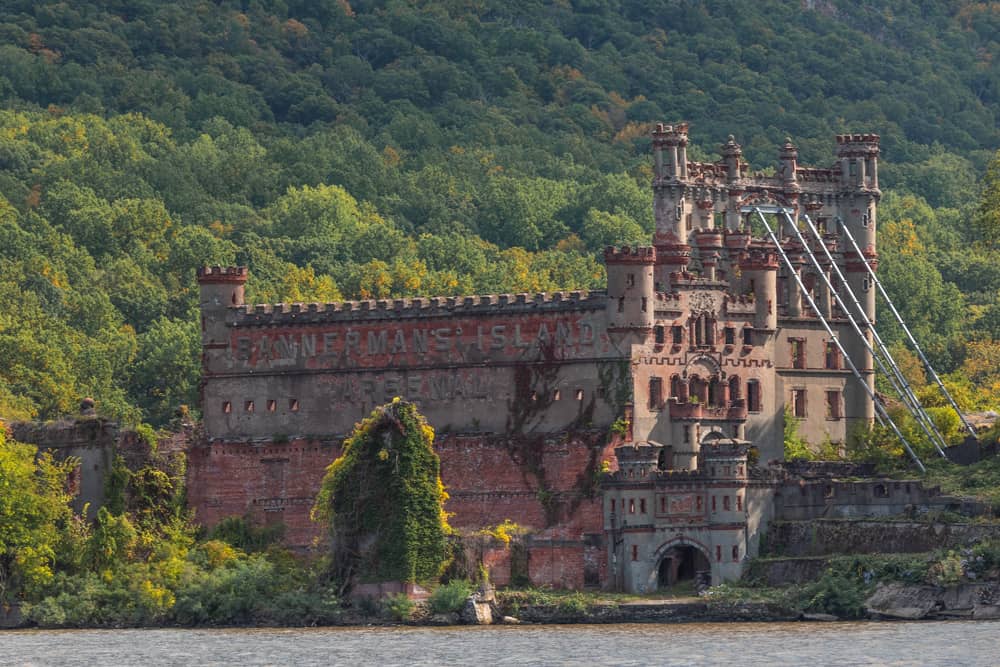 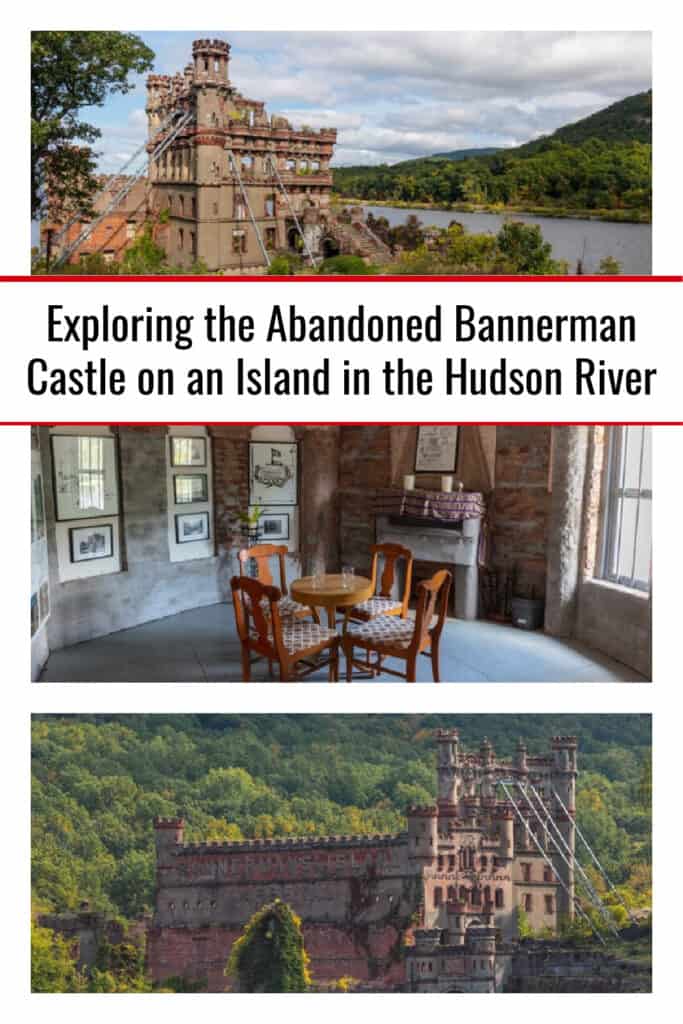 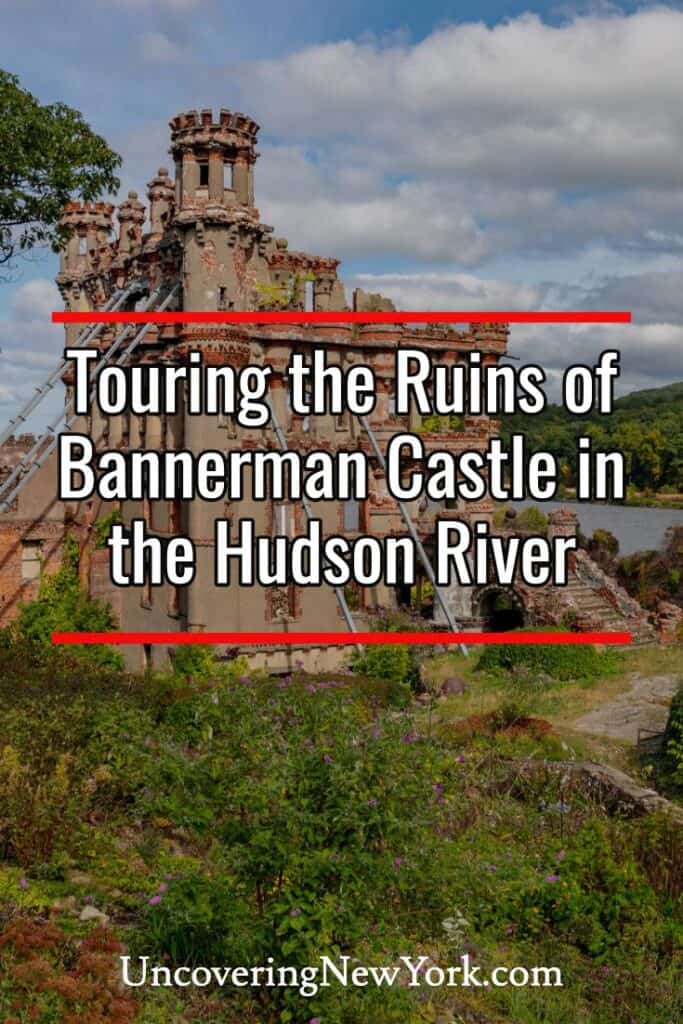 If you’ve ever stood along the Hudson River near Newburgh, Beacon, or Cornwall-on-Hudson and looked out over the river, it’s likely that you couldn’t help but notice the abandoned castle that sits on an island in the middle of the river.

Your eyes aren’t deceiving you. This six-acre island, known officially as Pollepel Island, is home to the incredible Bannerman Castle. Wanting to learn more about this amazing spot, I signed up for the seasonal tours offered by the Bannerman Castle Trust.

Since Bannerman Castle sits on an island in the middle of the Hudson River, tours start with a 30-minute boat ride that leaves from a dock in Beacon, New York that’s adjacent to the community’s train station. This makes it very convenient both for those with cars and those arriving by rail on the Metro-North Railroad’s Hudson Line (which is only 1:40 from Grand Central Station in New York City).

Boat rides to Bannerman Castle take roughly 30 minutes to traverse the 3.5-mile distance on the Hudson River. The boat, known as the Estuary Steward, is a relatively small boat with few frills. However, it makes for a nice and comfortable ride to the island.

Along the way, boat operators typically offer a bit of history on the area and point out nearby attractions in Beacon and Newburgh, including George Washington’s Headquarters and Dennings Point. That being said, the narration is unofficial and not a part of the trip, so your experience may vary.

Once docked on the island, guided tours begin at the top of the hill (roughly 70 steps up from the dock).

These tours of Bannerman Castle offer a fantastic look into the history of the island, including its use by Native Americans, Dutch sailors, and the Continental Army, prior to the island being purchased by Francis Bannerman VI in 1900.

Bannerman was the world’s foremost arms and military surplus merchant. At the height of his company, he produced a 300-page magazine that could (and did) outfit entire armies around the world.

Given his massive storage of explosive munitions, he was encouraged to move his company’s storage out of New York City. Pollepel Island made a perfect spot to safely store his wares.

For most of the next two decades until his death, Bannerman built multiple castles on the island as armories for his business. What you see today are actually multiple castles built next to each other and designed to resemble European castles, especially Scotland.

Despite what you might think about viewing them, people never lived in these castles, though there was a small home on the island for a caretaker and another for Bannerman and his family to stay in when visiting.

After Bannerman died in 1918, things began to change on the island, and it was permanently vacated in the early 1950s. In 1967, the state purchased the island and turned it into a state park. However, due to a massive fire in 1969 and the general state of the structures, it was left to ruin for the next few decades.

Tragedy again struck the island when, in December 2009, despite years of work to preserve the site, a large portion of the castle’s facade collapsed. Leaving only a portion still standing (which is now reinforced with giant metal supports).

Today, the Bannerman Island Trust runs tours on the island and maintains the remaining structures through a partnership with the state.

The guided tours visit several stops around the island, and, at each spot, guides tell more about the story of the island’s fascinating history.

Unfortunately, due to the instability of the remaining buildings, visitors are not allowed near the castle structure. However, there are several good vantage points where you can view it from 100-200 feet away.

Visitors can also explore the first floor of the Bannerman’s home on the island, which is in the process of being restored.

Inside, you’ll find a small gift shop, as well as signage telling more about the island’s history.

The guided tours of the islands last around 60 minutes, giving you roughly 30 minutes to explore the rest of the island. A series of trails wind their way up to various vantage points around the island, offering views of the castle and the Hudson River. There are also beautiful gardens on the island that are maintained by volunteers and add a lot of interest to the island.

Ultimately, my only complaint with my tour of Bannerman Castle is that I didn’t have more time to explore on my own. While I don’t think the guided tour was too long, it would have been nice to have had 45-60 minutes to really explore the entirety of the island. However, given that the entire trip takes 2.5 hours as it is, it’s probably about the right length overall.

It also would have been nice to have been able to get closer to the castle, but that’s obviously not allowed now due to safety issues with the remaining structure.

All that being said, Bannerman Island is a fantastic spot to visit. While this is more of a trip for history buffs than those that like independent exploration, I really enjoyed my time learning about this interesting spot in the Hudson Valley.

If you too love history, don’t miss the chance to take this fantastic tour.

Looking for even more spots to visit nearby? Check out the West Point Foundry Preserve, Buttermilk Falls Park, and the charming town of Port Jervis.

(Note that visits to and docking at the island are only allowed for guided tours and official events.) 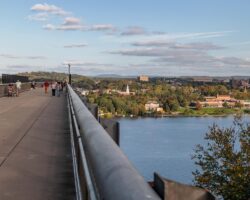 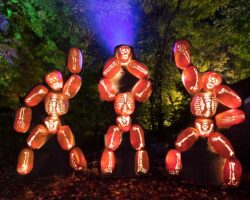 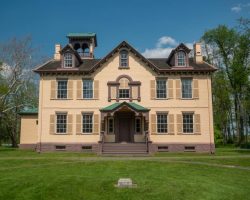